We’re so fucked up with ours lives these days that we don’t want to hold any crap from the next person. And by instance, if any even tiny and small dispute or issue occurs, then our overthinking overpowers the stress level at a higher stage. We’ll be smiling by responding to them, but then thinking of the worse scenarios on the other sides. Instead of talking straight to them, we start taking shitty advice from others, with whom has nothing to do with, but just the tip of gossip.

And the spark ignites by social media platform and the memes and quotes on “minding your own business and maintaining the distances from others as well”. 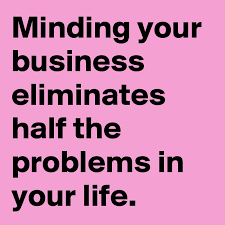 Tips on minding your own business

Things I’ve learned so far are:

In the last, I’ll advise you to share your words wisely with whosoever sharing the same.